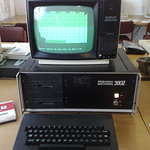 Long ago (back in the 80’s), my school had a couple of Research Machines 380Z computers for us to play around on. These things had about as much processing power as your average modern-day wristwatch, but were great fun nonetheless. In particular, I remember spending a lot of time playing a 3D noughts and crosses* game that was quite tricky to beat despite being programmed in BASIC.

More recently, I discovered that the entire contents of the floppy disk containing this game (plus a bunch of other demo programs) can be downloaded from rml380z.org. Since I don’t have a 380Z to run this software, I decided to resurrect the code by porting it to C.

You can now try it out yourself via telnet. Just follow this link. If that doesn’t work, open a command line terminal and type in the following:

Here’s a link to the original BASIC program.

Footnote: In 1980, a computer scientist called Oren Patashnik used 1500 hours of computer time to prove that there is a perfect winning strategy for the first player in 4×4×4 noughts and crosses. But don’t worry; the 380Z game isn’t quite that sophisticated.